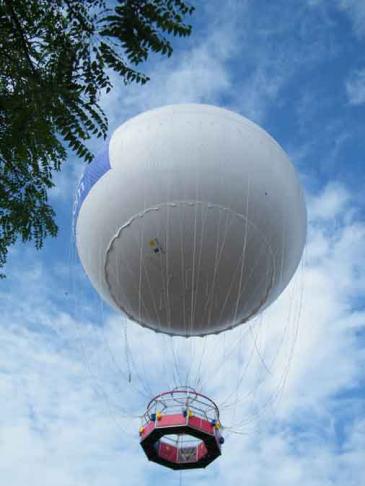 Ahmedabad, largest city in the State of Gujurat in the north west of India, is now the proud owner of India’s first passenger carrying tethered aerostat – the Lindstrand HiFlyer.

The site is located near Kankaria Lake, the biggest lake in Ahmedabad (in earlier days it used to known as Qutub Hojj), where all kings, or badshah, used to bathe. With an approximate circumference of 1.4 miles (2.3 km), it represents the regale history of Ahmedabad. It is located in the southern part of the city in Maninagar area, which is the most densely populated suburb of the city. Kankaria was built by Sultan Kutubuddin in 15th century A.D. The work was completed in 1451.

After an agonising slow sea voyage and a port diversion, the goods arrived on site amid much flourish, and the hardware including the large winch and mooring winches were all installed, load tested and ready for inflation in 2 days. A record for any Lindstrand installation team!

Our team had a running battle with thunderstorm and monsoonal downpours which ensured that the inflation was one of the most difficult LTL has had from start to finish.

Chief Minister Narendra Modi inaugurated the long-awaited HiFlyer. Children from low income families will be given special rides on the balloon, courtesy of the AMC (Ahmedabad Municipal Corporation).

Since the opening, the Ahmedabad Eye flew 1552 passengers in a single day – a record for any Lindstrand HiFlyer.

A Commonwealth Commission
Scroll to top