News
You are here: Home1 / News2 / Awards3 / AWARDS of EXCELLENCE at the IFAI International Achievement Awards 2011 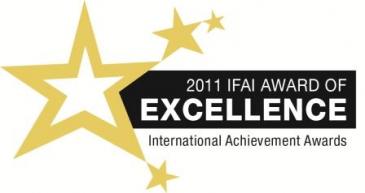 Lindstrand Technologies Ltd was awarded two AWARDS of EXCELLENCE in the Air Structures Category and the Technical Category.

The AS350 Helicopter Hangar (otherwise known as the Oden Hangar) beat off competition to take the AWARD of EXCELLENCE in the Fabric Structures Category. The hangar has travelled on board MV Oden, a polar ice breaker vessel, to both the Antarctic and the Arctic since its installation in 2010.

The Delhi Aerostat (otherwise known as the AeroTorus) took the AWARD of EXCELLENCE in the Technical Category. The structure was seen by a worldwide audience as the centre piece in the Jawaharlal Nehru Stadium for the Opening and Closing Ceremonies of the 19th Commonwealth Games, hosted by India in October 2010.

For more than 60 years, global companies have entered the annual International Achievements Awards. This prestigious competition provides high visibility recognition of the best products in the speciality fabrics market. Entries are judged by industry experts, editors, architects, and design professionals. Winners are selected based on complexity, design, workmanship, uniqueness and function. In 2011, IFAI received a total of 385 entries from 16 countries. The goal of the International Achievement Awards is to promote awareness of the speciality fabrics used in thousands of products and applications ranging in size and type. Lindstrand Technologies now adds 2011 to its list of previous award winning years (2001, 2003, 2006, 2007, 2008) producing bespoke air cell structures.