News
You are here: Home1 / News2 / HiFlyer3 / Away wins for South African HiFlyers 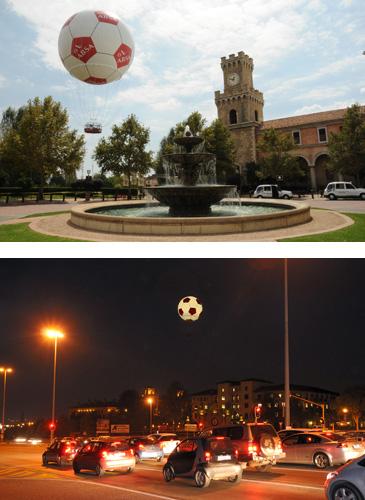 With Johannesburg as the host city for the 2010 FIFA World Cup football fever is already high in South Africa. LTL has kicked off its own campaign by supplying two identical HiFlyers to one customer simultaneously in March 2009. They were designed and built at the Oswestry factory and both envelopes are full size reproductions of red and white footballs. The HiFlyer envelopes are the largest ever constructed at the same time by LTL with a volume of 7800m3 each. This design change is due to the high altitude of Soweto and Johannesburg which lie at 1750 metres and 2000 metres respectively (a boiled egg will take an extra minute to cook and some tourists have been known to suffer from altitude sickness!)

Lindstrand Technologies’ representative in South Africa – Francis Chikasha operating as Aerail Displays (Pty) Ltd – became associated with HiFlyers back in 1999 when he was involved with the ‘Float over the Falls’ HiFlyer at Victoria Falls in Zimbabwe. Francis now works and lives in South Africa running his own company. He purchased his first HiFlyer (an all red one) back in 2005 for the Montecasino complex in Johannesburg and was sponsored by ABSA. ABSA is one of the largest banks in South African and is also the main football sponsor for the South African football league, just as Barclays Bank sponsors the football league here in the UK.

The Montecasino complex was the location for the first of the two HiFlyers installed in March. The second site was the Maponya Mall in Soweto, 14 miles from Johannesburg. The mall in Soweto marks a transformation for the Johannesburg township, once an impoverished centre in the struggle against apartheid. The complex covers 65,000 m2 and has 200 stores and an eight-screen cinema. It is the brainchild of 82-year-old entrepreneur Richard Maponya, who began in business by opening a dairy in Soweto in the 1950s.

Maponya Mall is one of the largest shopping centres in Southern Africa and was opened in 2007 amid much pomp and ceremony and with the blessings of Nelson Mandela. Nelson Mandela returned to Soweto for the first time in many years in 2007 to open the shopping complex. Soweto is the most populous black urban residential area in the country, thanks to its proximity to Johannesburg, the economic hub of the country; it is also the most metropolitan township in the country – setting trends in politics, fashion, music, dance and language. Soweto is seeing an increase in tourists who want to pay their respects to Nelson Mandela and Hector Pieterson in particular, two larger-than-life heroes of the struggle against apartheid – an opportunity which Aerial Displays hopes to tap into.

The LTL crew first deflated the existing all red HiFlyer at the Montecasino complex in Johannesburg and then installed the new ‘football’ HiFlyer the next day. This HiFlyer was up and inflated and taking passengers 2 days after installation. This was closely followed a week later by the installation of the second ‘football’ HiFlyer in Soweto.

The balloons officially opened in April and LTL are pleased to report that there have been no penalties given or red cards issued. The residents of Soweto in particular love their new giant football. LTL continues to win on away goals!

Per Lindstrand adds to his Awards Haul
Scroll to top