The HiFlyer Polar Ice Expedition is the first Polish Expedition to conquer the highest point in Arctic.

The participants are Polish adventures, who are also engaged in establishing another record – the highest observation platform in Krakow. This will be achieved through the Lindstrand tethered balloon – the HiFlyer, which visitors and guests of the city will be able to explore in summer 2008.

To see the animation of the balloon: www.hiflyer.pl – “zobacz prezentacie” 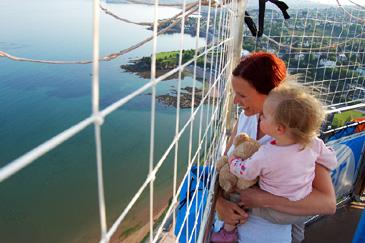 On May 23rd, the Torquay HiFlyer welcomed its first passengers. The tethered balloon now provides regular flights from 10 a.m. to 9 p.m. (weather permitting) inviting passengers to re-discover the Bay from an absolutely new perspective in a thrilling journey 400ft (120m) above the coastline.

The HiFlyer flight is suitable for everybody – child and adult alike; the gondola can comfortably accommodate up to 30 passengers. It allows every passenger an unhindered view and is highly accessible for a standard (lightweight) wheelchair with open weave viewing port ensuring the view is not obstructed.

Certificated by Civil Aviation Authority, the Lindstrand HiFlyer provides a safe and thrilling experience of the balloon ride and the memory of a lifetime. It is the third member of the HiFlyer family in the United Kingdom: the HiFlyer ride is also available in Leeds Castle, Kent and Bournemouth. 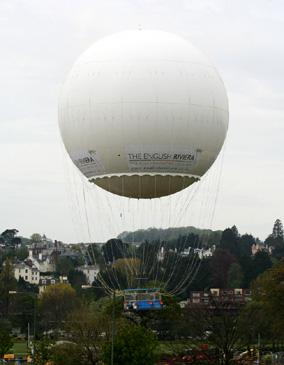 Lindstrand crew spent May bank holidays in hard work installing and inflating the brand new HiFlyer on the picturesque Torbay coast. After weeks of weather delays, residents and visitors of Torquay finally saw the giant tethered balloon rising high above the city and the bay.

Not without controversy and protests, the overall perception of the new attraction is very positive and optimistic as the City Mayor, Mr. Nick Bye, says: “It is already generating regional and national publicity which has to be a good thing in attracting more people into the Bay”.

The owner and operator of the Torquay HiFlyer, Lindstrand AeroPlatforms expects the official launch of the attraction to be held around the middle of May after the health and safety inspection is carried out by Torbay Council, and the correspondent license is obtained from Civil Aviation Authority. 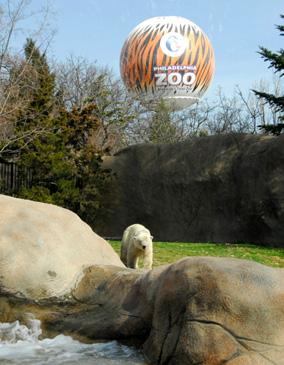 On 17th March 2008 Philadelphia Zoo made way for a bold fun new look for its Channel 6 Zooballoon ride. Channel 6 Zooballoon is the HiFlyer renamed after its sponsor – a major TV channel of the Delaware Valley. After six and a half years of operations it was time to change the hand painted giraffe envelope, so Lindstrand Technologies produced a new tiger balloon for the bright start of the new season.

The Philadelphia Zoo is not only America’s first zoo – it’s the only zoo in the world offering this exciting and true family attraction since 2002. The balloon carries over 55 000 passengers per annum, enjoying a safari high above the treetops, overlooking the zoo’s inhabitants and a spectacular ever-growing Philadelphia skyline.

The new exciting bold “Big Cat” look of the Channel 6 Zooballoon is part of the countdown activities for the zoo’s 150-year anniversary taking place on 21st March, 2009.

Taking this opportunity, we have interviewed balloon operations manager, Matt Monfredi, the key person of the balloon smooth operations over all these years. Matt has over 10 years of experience with the HiFlyers: besides overlooking the Philadelphia Channel 6 Zooballoon, Matt supervised and operated the HiFlyers in Tenerife and Barcelona.