News
You are here: Home1 / News2 / Aerostats3 / A Commonwealth Commission 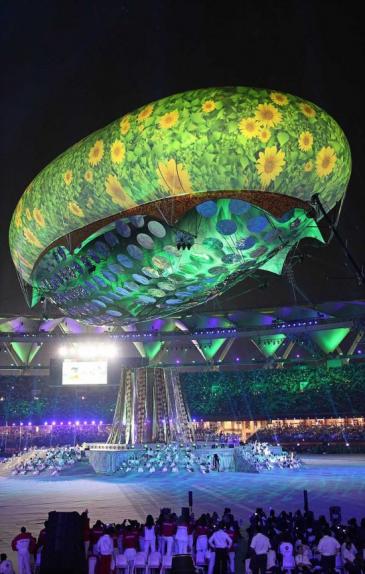 After months of bad publicity, the Delhi 2010 Commonwealth Games kicked off in spectacular style. Seen by over 1 billion people, a huge aerostat emerged from the darkness of the Jawaharlal Nehru stadium to tumultuous applause and a shower of camera flashes on Sunday 3rd October. As it rose effortlessly towards the open, clear skies of an Indian evening, the spectators marvelled at the projected images, showcasing the rich culture and history that India has to offer.

The helium filled aerostat was the brain child of Mark Fisher, the genius designer behind some of the world’s most spectacular entertainment events – Cirque du Soleil, the Beijing Olympics Opening Ceremony and international rock concerts. Lindstrand Technologies Ltd turned the conceptual design into reality.

LTL was approached back in January 2010 about the feasibility of making a helium filled structure which would ‘float’ above a stadium in New Delhi as part of the Opening Ceremony of the 19th Commonwealth Games to be held in October 2010. At the time, no-one could foresee how simply stunning this creation would become.

The aerostat became known as the ‘AeroTorus’ and was designed and built in 4 sections by using advanced fabric welding methods, perfected by Lindstrand Technologies in many of its applications. At 80 meters long by 40 meters wide and with a height of 12 meters, the ‘AeroTorus’ is the largest tethered aerostat built to date. Five kilometres of fabric were required to make the structure, whose geometry is based on the ‘torus’ – a product of two circles – and which can be seen in many common every day items such as ring doughnuts, life buoys, inner tubes of bicycles etc. Each section was designed to be joined together using zips and Dutch lacing which would ensure no separation of the sections and protect the air ballonets. A digitally printed ‘skirt’, produced by MediaCo in Manchester, depicting Indian symbolism completed the fabric creation.

The aerostat pressure was maintained using traditional methods adopted in lighter-than-air technology, i.e. the use of helium valves, pressure relief valves and ballonet fans. Over 5 kms of wiring controlled the aerostat with each torus section having its own dedicated valves and fans to regulate pressure.

The manufacture of the aerostat took place at Lindstrand’s American factory, and all the sections were completed in a 3 month time scale. They were shipped across to the UK for a full system integration and air fill test, before leaving for India. The test event was held at Rednal, a former RAF airfield near Oswestry, Shropshire. It gave LTL the opportunity to check all system parts of the aerostat and allowed time for valuable training for Team Torus who would be in Delhi, installing the aerostat in the stadium. This stage of the project involved every employee of LTL pulling and manhandling over 6 tonnes of fabric into position. Therefore it was critical for the installation team to perfect their techniques before departure in early September.

Despite issues with Customs in India, all the equipment associated with the ‘AeroTorus’ project arrived at the end of August, just as the worst monsoons in recent years hit the city. The initial installation was postponed by 1 week, to allow the Commonwealth Stadium to be filled with 600 tonnes of sand and gravel and additional covering laid over the central field of play.

LTL sent an international team of engineers out to Delhi, whose combined experience in the lighter-than-air field exceeds 100 years. Our team included electricians from Poland and Mexico, supervisors from the USA and a core team from the factory in the UK under the watchful leadership of Dave Gill, a highly experienced and time served test pilot and aerostat engineer.

The contrast between installations at Rednal, UK and in the Jawaharlal Nehru Stadium could not have been more stark. Delhi was awash with water, temperatures soared above 400C and the high humidity sapped every ounce of energy from the installation team.

What was a minor miracle was the time taken to fill the aerostat from liquid helium. This was originally expected to take 10 hours, but LTL improved on this time, with the assistance of Air Products, taking 6 hours for the Opening Ceremony fill and 3 hours for the Closing Ceremony fill. The coolest place in Delhi happened to be right next to the huge helium vaporisers where the temperature dropped to below -2000C – no wonder our team took turns to monitor the helium flow.

The aerostat breathed life into the stadium. From this point onwards the aerostat played a vital part in rehearsals for the two ceremonies, with the winching team practising the ascent and descent of the aerostat under the direction of the Organising Committee Creative Team.

At exactly 7pm local time in India on Sunday 3rd October, the eyes of the world turned towards New Delhi, waiting expectantly for perhaps yet another negative headline. Instead, what they got was an audio-visual feast, capable of silencing many of the Games’ worst critics, and it is in no small part thanks to Mark Fisher and Lindstrand Technologies Ltd.

The Igloo Geodesic
Scroll to top