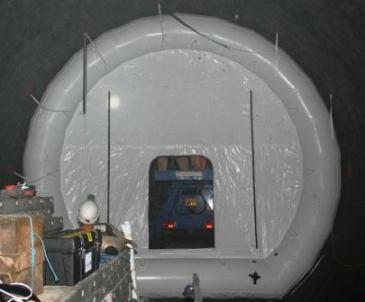 In early August 2011 Lindstrand Technologies Ltd delivered and installed a tunnel plug that will block the airflow inside a tunnel in the event of an emergency such as a fire. This was for a UK based company.

The plug is designed to be held tight back to the tunnel lining in a deflated state during normal operations to allow vehicular access. If there is a requirement to cut off the airflow within the tunnel, the plug can be quickly deployed, inflating to fill the complete tunnel section in under a minute.

Installation is quick and simple, allowing the plug to be moved to different locations within the tunnel with minimal effort.