News
You are here: Home1 / News2 / Awards3 / Per Lindstrand adds to his Awards Haul 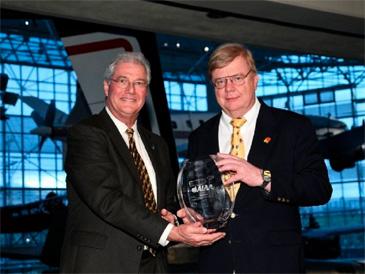 This Award is given to those who, by their achievements, have contributed in a major way to the advancement of the science, operations, or manufacturing associated with buoyant flight. This award has been made to individuals like Jim Thiele of the American Blimp Company; George Spyrou of Airship Management Services; and Scott Danneker – test pilot of the Sentinel 1000 and NT 07 airships. The recipient is chosen by the LTA TC Committee. Per is the first non American citizen to receive this award in the history of the AIAA.

Per receives his award from Michael Conners – Chairman of the AIAA LTA TC at the Museum of Flight in Seattle in May 2009.

Away wins for South African HiFlyers

Lindstrand Technologies prepares for a busy winter
Scroll to top