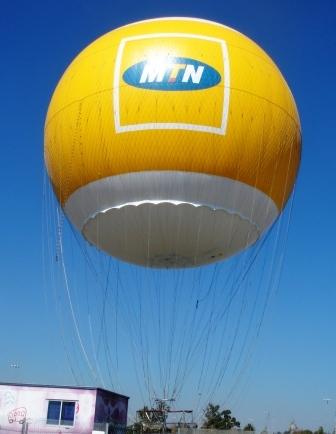 Thanks to a new sponsor, The Soweto HiFlyer is now flying with bold corporate colours applied to a new envelope.

First installed by Aerial Displays of South Africa back in 2009 at the Maponya Mall in Soweto, this HiFlyer system has benefited from corporate advertising – firstly ABSA and now MTN.

MTN is Africa’s largest telecommunications company, and here in the UK has a high profile in the Barclays Premier League (BPL) with a 3 year broadcast sponsorship of the BPL across Africa (since 2010), and as from 2010 a partnership agreement with Manchester United football club.

Aerial Displays (http://www.aerialdisplays.co.za/) is now the largest HiFlyer customer on the African continent with a total of three systems operating throughout Johannesburg, all supported by corporate sponsorship.

The inflation was carried out using liquid helium which always necessitates specialised equipment to ensure that the envelope is filled with the equivalent gas volume.

The Perfect Seat for EURO 2012

News & Features A Return to the Balearics
Scroll to top