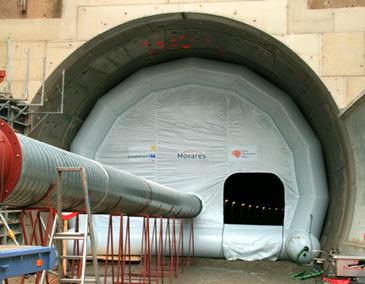 The Hague, the Netherlands

On 19th and 20th of January 2008, a new innovative fire extinguishing system for tunnel fires has been successfully tested in the new Hubertustunnel in The Hague, the Netherlands. The system consisted of Lindstrand inflatable tunnel plug and Steamexfire machine, invention of the Liberty Gasturbine Holland.

Because of the large number of tunnels, and the increasing economic value of them, European authorities, such as Dutch organizations ProRail and RWS (rail and road tunnel responsible) show interest in innovations in the spectrum of fire suppression methods for large tunnel fires.

Current methods of fighting tunnel fires suggest using manpower only as the nature of tunnel does not allow installation of the sprinkler systems. Lindstrand Technologies introduced inflatable tunnel plugs – an effective solution that terminates fire by cutting off the oxygen supply in the tunnel. Installed in 100m interval, inflatable plugs can be deployed automatically at minimum time and with no risk to firemen lives.

Tigers do fly! Re-launch of the new Channel 6 Zooballoon in Philadelphia Zo...
Scroll to top